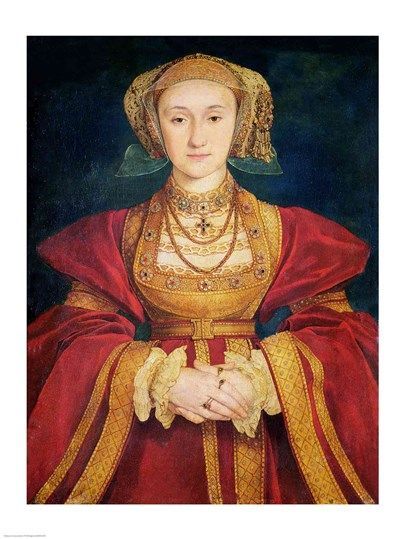 Anne of Cleves lands at Deal in England at 5 pm on the 27th of December in 1539, bringing with her a new type of sleeves that instantly become fashionable. 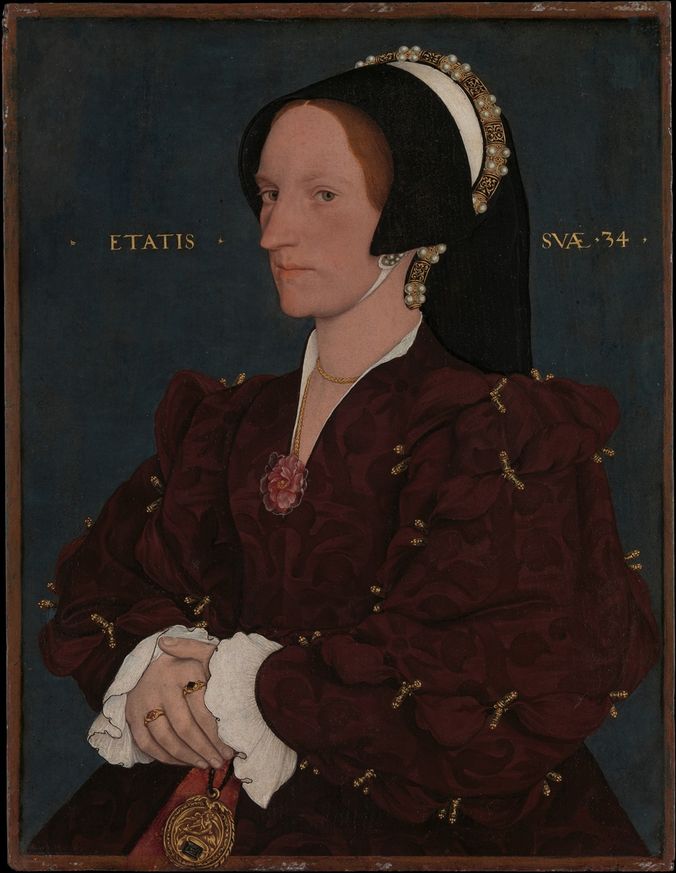 Workshop of Hans Holbein the Younger 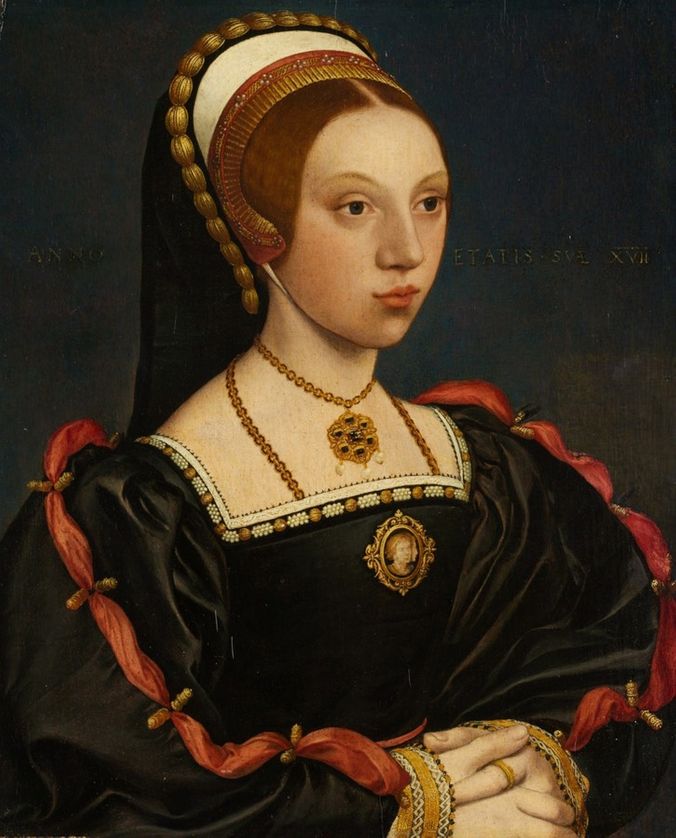 Portrait of a Young Woman

Workshop of Hans Holbein the Younger 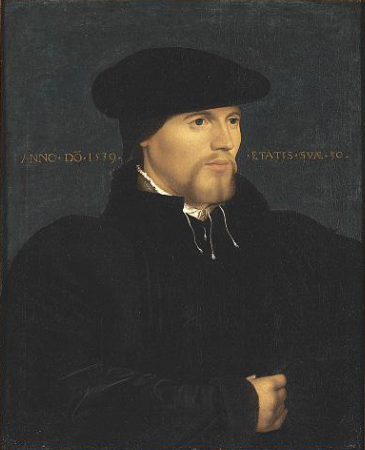 Portrait of a man in black

Follower of Hans Holbein the Younger 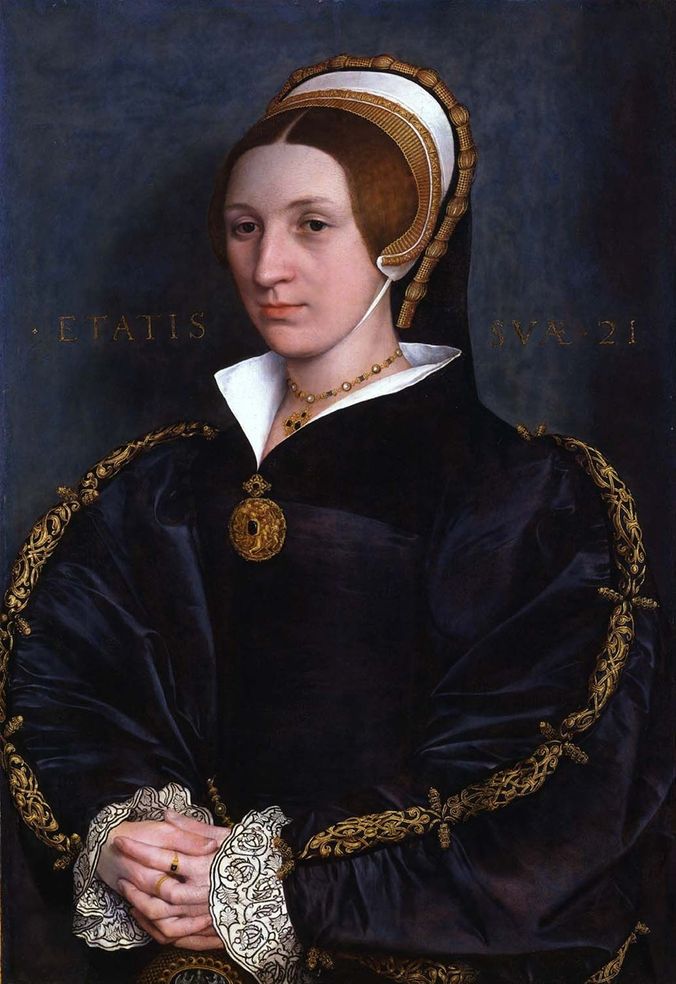 Portrait of a Lady, probably a Member of the Cromwell Family

I make a great case for this being his wife, Frances Murfyn, Lady Cromwell here: The Toledo Portrait

* Painted between between the 27th of December 1539 when Anne of Cleves arrived in England and introduced this type of sleeves to that country and the 25th of March 1540 when the new year commenced for the Tudors, re: the inscription 1539 on the portrait of the man. In Tudor times in England the calendar year started from Lady Day (25 March), thus, to them, it would still have been 1539 until that date, three months into what for us would have been the new year 1540. The paintings were probably painted to be a portrait set, like the Guildfords. 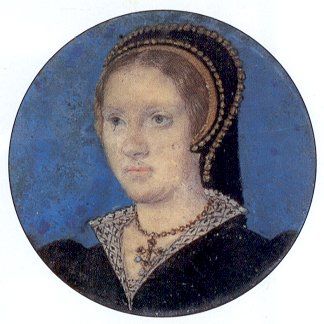 By [1540], elongated gabled hoods would have been terribly out of style. The fashion of the early 1540’s dictated shortened frames aligned with the mouth, and even the adaptation of the more chic rounded French hood altogether. Even the austere order of the Grey Friars of London could not help but make note in their chronicle how beginning in 1540 ‘then began all the gentlewomen of England to wear French hoods with billiments of gold’. The popularity of French styles at Henry VIII’s court during this period was also observed by the ambassador Charles de Marillac who described Queen Katheryn Howard and her ladies as ‘vestue à la françoise’. Two New Faces: the Hornebolte Portraits of Mary and Thomas Boleyn? – Tudor Faces 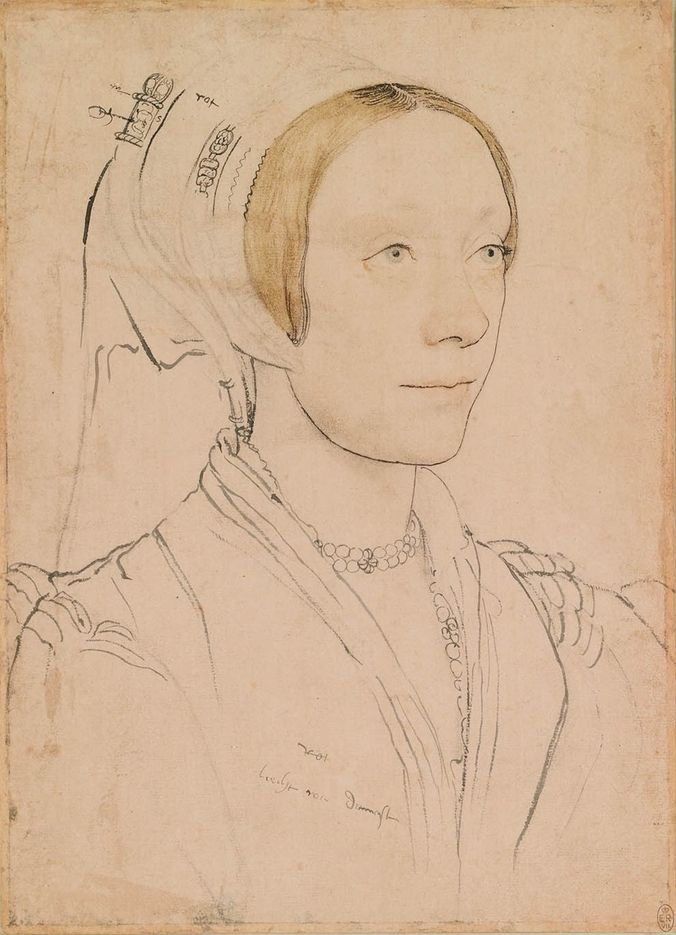 *I have dated this to 1540–1543, a narrower time period than the Royal Collection does, based on the type of sleeves, which firmly dates the sketch to 1540–1543, the only time when both those sleeves would have been modern and Holbein would have been alive. Which is also the exact time of Katherine Howard's rise to prominence and queenship. The lady is even wearing what appears to be the consort necklace around her throat, only with six pearl clusters alternating with the precious stones set in quatrefoils instead of the four pearl clusters or the two pearl clusters we have seen previously. The billiments on her French hood are certainly fine enough to be those of a Queen. See our Katherine Howard page.

[W]e must first look at the fashion worn by ladies during the 1540’s. It was during this period that it became more favourable for ladies to cover the chest rather than the previous fashion of the chest being revealed by the low-cut French gowns. As seen in a portrait thought to depict Katherine Howard and now in the Royal Collection. This was achieved with the use of a partlet. Worn beneath the bodice and tied under the arms this would have been made from a fine fabric. The Beaufort Miniature Portrait – Lady Jane Grey Revisited 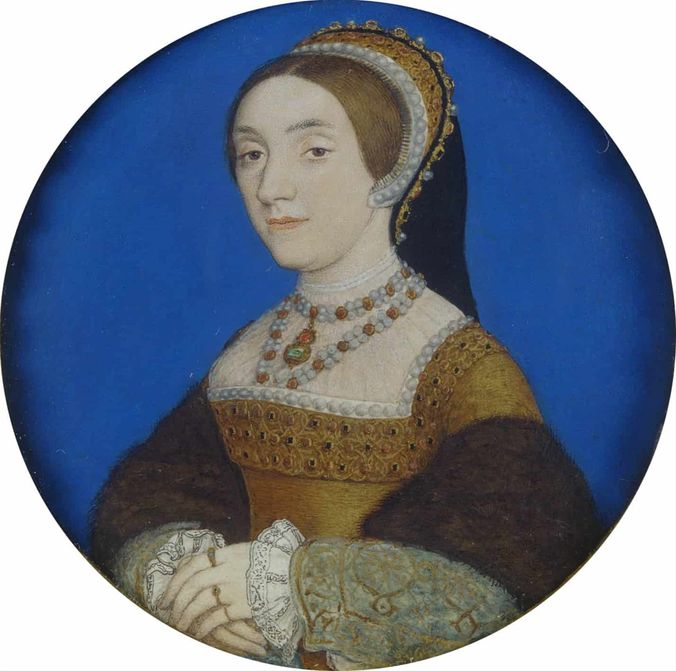 There are several references in the 1540's to partlets in the household expences of her step-daughter, Mary. 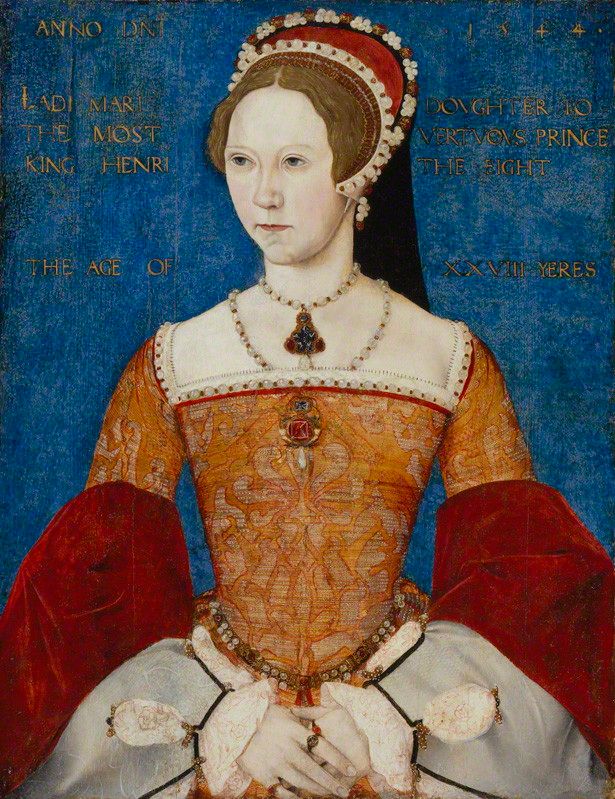 Mary I Tudor when a Princess 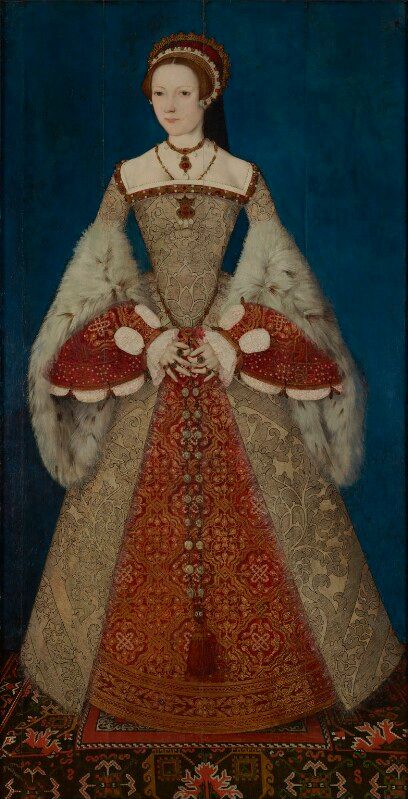 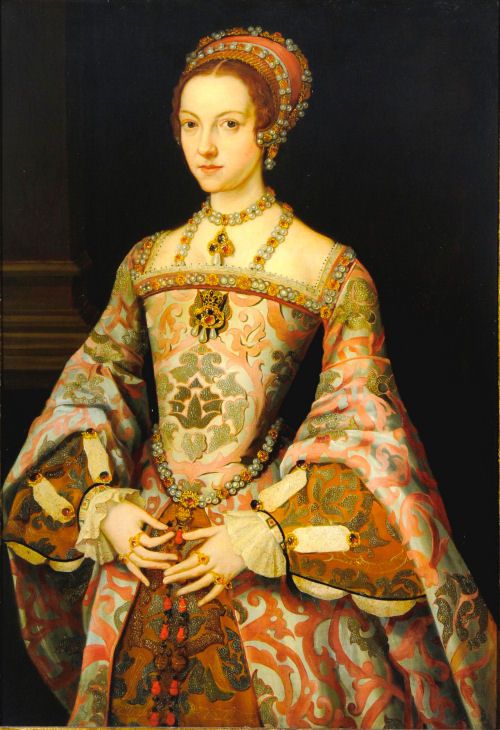 The Hastings or Melton Constable Portrait 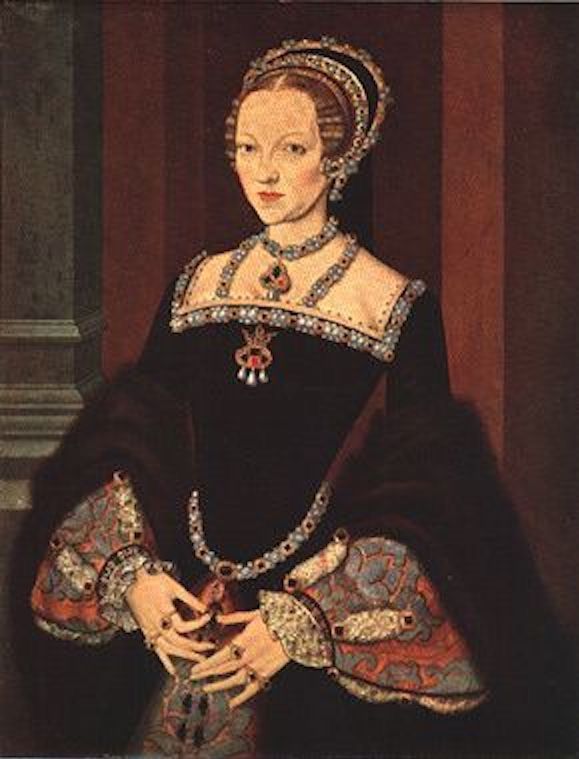 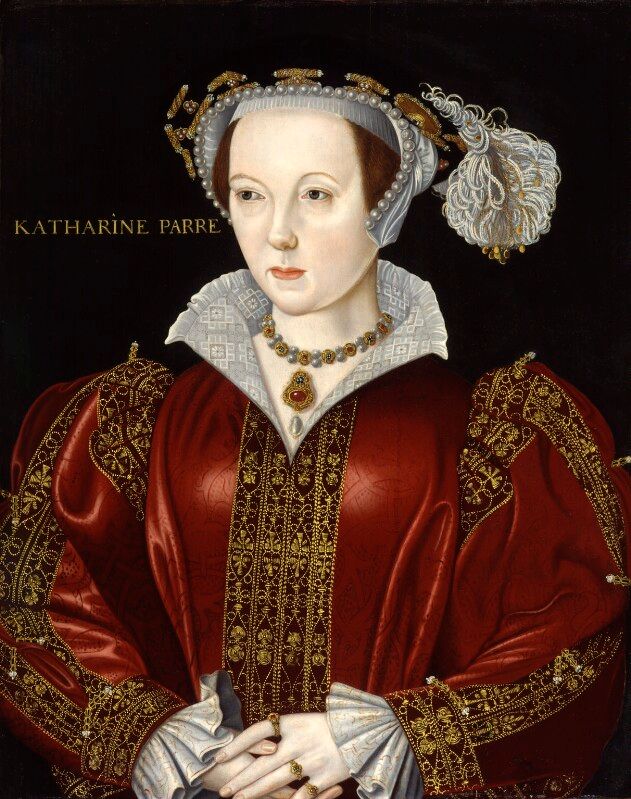 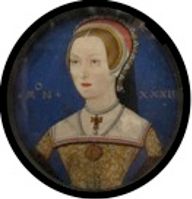 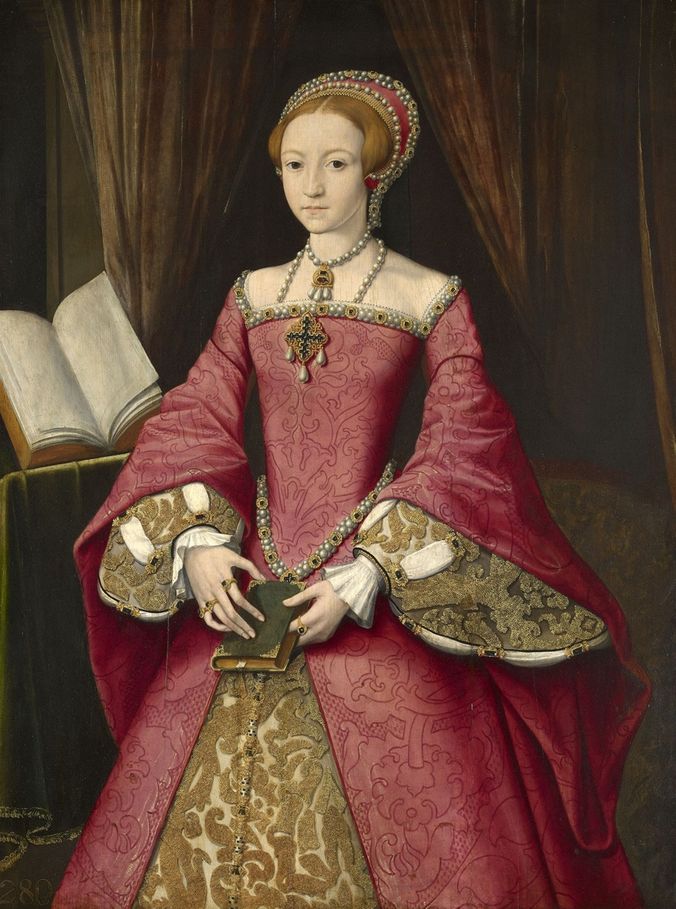 Elizabeth I when a Princess

Elizabeth I when a Princess 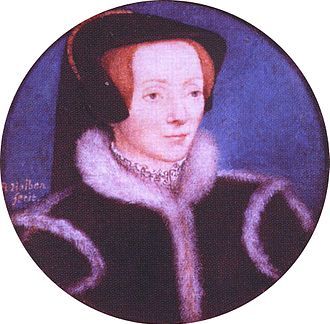 It looks like The Tau cross derives from the Egyptian Ankh and basically they are wearing it around their necks, life rebirth, salvation mirror. sun.Stonehenge looks like it is made up of Ts to form c

are wearing the symbol on effigies at Ingham church Norfolk and Henry StanleyD1528 at Hillingdon Middlesex.Countess Jacquline of Hainaut and husband Frank Borsele are also wearing the insignia others

These Queens could of been members of the order and i think the Tau cross is a symbol of the Holy Trinity also.These pendants could of been reliquaries.Lady margaret de Bois and Roger de bois

I think the Tau cross that they are wearing could be linked to the(knights) order of St Anthony, Mary 1st collar looks like it may represent the knotted girdle/waist cord of st Anthony .